Reactions to Apple events are generally either 'that's crazy' or 'that's boring', and reactions to yesterday's were definitely on the 'boring' side. There's certainly a bit of housekeeping (new Apple watch bands, say), but actually, I think there are two things that are pretty important.
https://www.ben-evans.com

Indent with tabs or spaces? I wish I didn't need to know.

The always entertaining Erica Sadun wrote an article on her blog yesterday about code indentation styles, titled “Swift Style: Are you a 4-denter?". There was a flurry of replies on Twitter as others playfully chimed in.
https://www.cocoawithlove.com 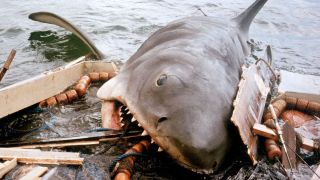 They say that Jaws and Star Wars changed cinema forever and they’re right, but only partly. Let’s take a look at Jaws first.
http://www.gamesradar.com

Not Your Asian Ninja: How the Marvel Cinematic Universe Keeps Failing Asian-Americans

I liked Daredevil Season 2 a lot. I didn’t like it quite as much as Season 1, but it was always going to be impossible to find someone to live up to Vincent D’Onofrio’s take on Wilson Fisk (who still effortlessly steals the few scenes he gets this season).
http://www.thedailybeast.com

To Optional or Not to Optional: IBOutlet

Optionals are a new concept to the Cococa world. Where-as Objective-C allowed for willy-nilly nil messaging, Swift wants you to be explicit and know when the possibility of nil exists.
https://blog.curtisherbert.com

Up until a year ago, Foursquare had a very typical interview process for a startup. We started with a phone call where the candidate implemented one or two simple questions in a collaborative editor.
http://engineering.foursquare.com How We Decide What To Build Next At Appbot

This post originally appeared on the Appbot Blog. Feature requests, bug reports, wants, needs, nice to haves but what to build next? As product managers we are overwhelmed by all these on a daily basis.
https://medium.com

Apple is unique, and I mean that objectively. Forget about products for a moment, about which reasonable people can disagree. Leave aside the financial results, which certainly are unprecedented.
https://stratechery.com

The Trouble with Manager Objects

The first time I look at a legacy project, I scan for warning signs. I’ve covered singletons, excessive observers, and today I’ll talk about “Manager” classes. I have to reiterate these are guidelines, not rules, and among guidelines, this one isn’t critical.
https://sandofsky.com